Posted at 12:33h in News by Nicole Raymond
0 Likes

On Friday evening the 5th of March, ACRA Members and guests gathered in Sydney and in Brisbane for the announcement of ACRA Awards Winners. Steve Hoskins (EmCee) gave a colourful description of all projects and a ‘solid’ performance. He managed to cram in as many construction, concrete, and corrosion puns and jokes as I could possibly cram in a 2-hour performance.
Another first for ACRA was Grahame Vile introducing the “Presidents Choice Award” which was presented to Freyssient Australia for the MLC Centre Facade Maintenance Project Design & Construct. This is a new tradition for ACRA.

We will give more detail in the next Remedial Connections as to why Grahame Vile, ACRA President, had chosen Freyssinet.

Grahame also announced 2 ACRA Life Member Awards that went to Tony Watson and John Oconnell. Both have been proactive members of ACRA, played active roles on the Board, and continue to present at ACRA Seminars, Judge awards from time to time, and promote ACRA within their business. President Grahame Vile sat down recently to interview them both. We’ll be releasing these interviews on the ACRA website and social media. The printed interview will appear in Remedial Connections and the website.

ACRA will put together folders for each of the winners that contain their winning awards and photos of them taken on the night and we’ll distribute them this week.  If you have taken any photos on the night please share them with us to or if they are on your phone you can txt them to Nicole at 042 9890 761.

Keep an eye out for our F2F and webinar series on the Award Winners. 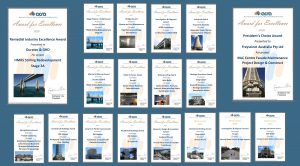