Apartment owners forced to replace flammable cladding on high-risk buildings across NSW will be able to access interest-free loans as part of a $1 billion government program over the next three years aimed at helping to resolve the crisis.

The program, which will be unveiled in the state budget on Tuesday, includes $139 million to establish and offer technical support to owners for the remediation of at-risk buildings. 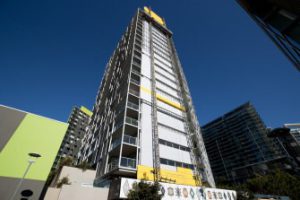 Cladding is removed from the Distillery apartment tower at Pyrmont in inner Sydney. CREDIT:JANIE BARRETT

The government will also be covering the interest bill – capped at $930 million – for loans taken out over the next three years by building owners to remove and replace combustible cladding.

The interest-free loans will apply only to about 225 buildings identified as high risk. The government has estimated the average cost to remove cladding from those at $4 million each.

Better Regulation and Innovation Minister Kevin Anderson said the centrepiece of the program was a government commitment to subsidise the interest on loans to building owners and owners corporations to help them fast-track the removal of unsafe cladding.

“Owners have asked for financial and technical support to help them manage the process. This program will provide peace of mind to those living in affected buildings,” he said. 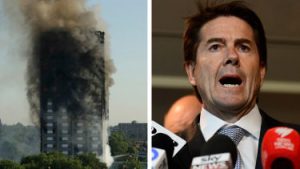 London’s Grenfell fire in 2017, which claimed the lives of 72 people, exposed the dangers of flammable cladding.

The government has been under pressure to follow Victoria’s lead in funding rectification work, partly given the financial pressure owners are under due to the coronavirus-induced recession.

The Victorian government’s $600 million to help resolve the crisis directly covers some owners’ costs to remove cladding from high-risk buildings.

But Mr Anderson said interest-free loans were the “quickest and most effective” way to remove high-risk cladding, and without the NSW program owners would have to resort to commercial loans which could have interest rates of up to 10 per cent.

“A loan scheme also balances the needs of impacted residents and demands on the budget given the economy has taken a huge hit,” he said.

He described Victoria as a “perfect example of what not to do”, claiming the southern state’s program was not properly calculated and lacked technical advice.

“As a result, 18 months after their big announcement the work there is just not being done,” he said. “We will be doing this once, and we will be doing it right. We have a plan in place and the financing to do it.”

Mr Anderson and Treasurer Dominic Perrottet will release more details about how the program will operate in the middle of next month.

Building owners and strata corporations will be able to make applications for the interest-free loans in March, after the government finalises a financial loan provider.

Under the program, the government aims for the work to remove cladding to begin in June.

Owners of high-rise towers have been in a bind over what to replace combustible cladding with.

While a product safety panel was set up in August, the Building Commissioner has said it is unlikely to advise on which replacement cladding materials should be used until early next year.